Advertising. I received the FreeStyle Libre 2 free of charge from Abbott for testing purposes. My contribution reflects my own opinion, is true and in no way influenced by Abbott.

Realizing a difference in my diabetes therapy

If you are following me on Instagram you may have noticed that I’m using a closed loop system – an App (AAPS) receives blood sugar values every 5 minutes, evaluates them and then controls my insulin pump. A huge dream came true for me and I don’t want to miss this technology anymore. Nevertheless, I notice an increasing dependency. Do I have my smartphone with me? Is the battery charged and does it last for my trip? Is my powerbank still charged? Is the Bluetooth connection still established? I don’t want to complain at all, but I used testing period of the Freestyle Libre 2 to pause my closed loop and to do another kind of diabetes therapy. I call it blood sugar surfing. This type of surfing requires regular monitoring of my blood sugar and would be a heavy burden for me without hypo- and hyper-alarms. This form of therapy is not in any schoolbook, but through the test phase of Freestyle Libre 2 I became aware of what I had done months or even years before without knowing it. Bevor I used the ‘artificial pancreas’ my sugar was 70 to 80 percent within the target range. So, neither I nor a doctor could know what I did to regulate my sugar.

What do I mean by blood sugar surfing? When I ate something, I immediately entered the bolus units via the quick bolus function of my insulin pump without even thinking about counting carbohydrates in grams. I was always sure I didn’t need a bolus calculator. I was sure that I injected everything correctly. But what has become a habit over the years has been to pick up sweets as soon as my sugar starts dropping. Shortly before 80 mg/dL my sugar increased again and I stayed within the target range. I realized that I was injecting too much on a regular basis and that I was correcting too high values far too strongly and too often even though insulin was still working.

Even after I had gained this insight, while testing the Freestyle Libre 2 I fell back to my old patterns and to be honest this change was very pleasant. I was more aware of my body’s signals again and I could take more care of my actual diabetes instead of all the technology that sticks on and around my body. For these situations the alarms of the Libre 2 were extremely useful. 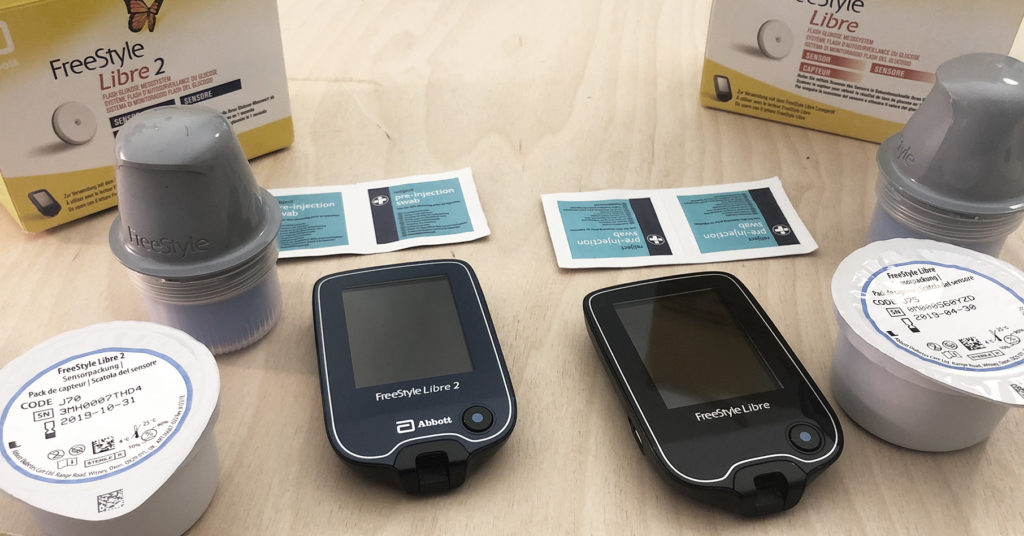 The difference between Freestyle Libre 1 and 2

I don’t need to say much about the visual look of Freestyle Libre 2. It is identical to the Libre 1, but according to Abbott, the Freestyle Libre 2 is more accurate than the Freestyle Libre 1. Since I hadn’t any problems with the accuracy with the Freestyle Libre 1, I can neither confirm nor disprove this. But the technology insight is different. The sensor and the reader have NFC and Bluetooth. Currently it is possible to be warned when a High or Low glucose reading was recognized. To get the actual blood sugar value you have to scan as usual. For those who are not ‘technical experts’ and extended the Libre with unofficial readers, this function is a clear and important advantage compared to the first version. Interesting is the way how or when the alarm is triggered. It only starts when the defined blood sugar limit is exceeded. Once the alarm is confirmed, there is no more alarm. In order to get a new alarm, the blood sugar reading needs to be in range again first. During the day I find this very good, because it leads to fewer alarms compared to CGMS. At night this can become a problem.

It’s a pity that Abbott’s own app and all unofficial transmitters like the BluCon or the MiaoMiao don’t work with the Freestlye Libre 2.

All in all, Freestyle Libre 2 and its alarms make everyday life even easier. In a way, the alarm is more like a reminder to scan the Libre. For me the test was valuable and showed me the dependency on the current algorithms in AndroidAPS. Even if the reorientation to other measuring systems is complex, I find it an enrichment. Therefore, I’m willing to change to other systems more often.

43 thoughts on “Freestyle Libre 2 with alarms and my experience”

This site uses Akismet to reduce spam. Learn how your comment data is processed.

Find out what’s in your food

I developed a prototype for blind people with diab

I scrolled through my pictures and was surprised h

With this nice tool I have my blood glucose always

I'm working on an app for and with the diabetes co

When I run out of insulin, I get nervous, even tho

What is your top priority and how do you choose di

Last week my android phone got wet so I wasn't abl

My android phone that I used for my closed loop di

What is your favorite diabetes life hack? #diabe

The Dark Side of Diabetes Technology - #maytheloop